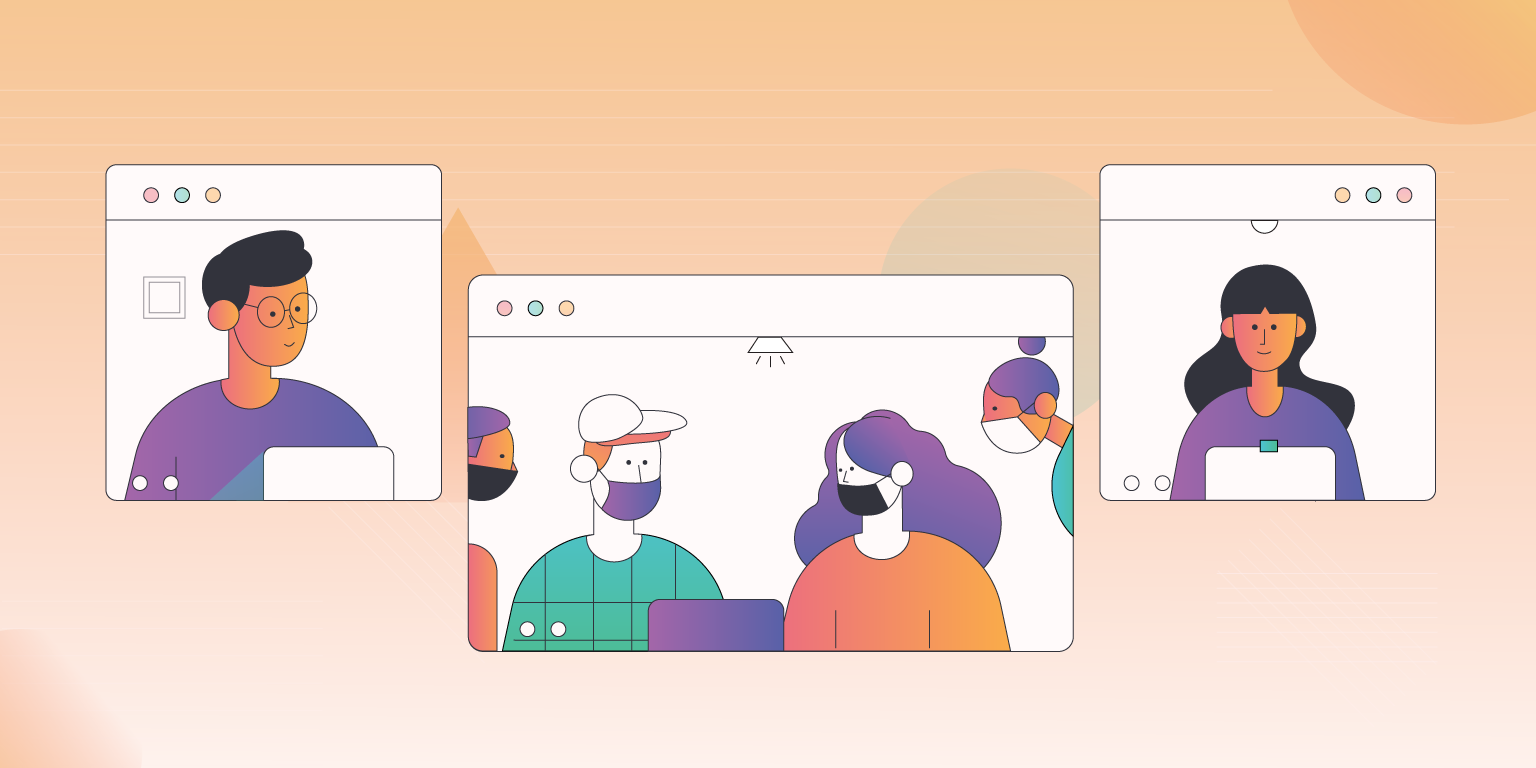 Hybrid means more than an in-person event with streaming. Discover what events will look like in the hybrid era and learn from six frontrunner organizers.

Cast your mind back to 2019. It’s September 10, and a packed Steve Jobs Theater buzzes with excitement. After a couple of minutes, Tim Cook walks on stage in front of a multicolored Apple logo and the 1,000-strong crowd erupts with applause.

For the next hour and a half, the Apple CEO unveils one new product after another. Apple Arcade and Apple TV both elicit applause. An all-new iPad and a refreshed Apple Watch generate cheers. The cutting-edge iPhone 11 Pro has superfans salivating.

It’s easy to focus on the in-person response: the cheers, claps, and laughs from the people in attendance. But Apple’s September Event 2019 went further. Much further…at least by the standards of 2019.

Two million people from all over the world tuned in to watch Cook’s presentation—that’s 99.95% of the entire audience. In their own homes and offices, they cheered and clapped and laughed just like the people in the Steve Jobs Theater.

For decades, this was the extent of hybrid events: An in-person talk, tradeshow, or conference with a virtual bolt-on. But the COVID-19 pandemic has poured gas on the fire of innovation.

Hybrid events of the future will feature meaningfully integrated experiences for virtual and physical attendees. They’ll combine the irreplaceable magic of in-person with the amazing reach and insights of virtual. They’ll personalize experiences to individual attendees, rather than delivering the same cookie cutter event.

To explore just how powerful hybrid events can be, we’ve profiled six of the best examples from the past few years.

When Texas opened up in early 2021, event organizers around the world were watching. Would the industry move back to in-person? Would they experiment with hybrid events? How would they keep attendees safe? Texas promised a glimpse into the future of events—and they had everyone’s undivided attention.

It didn’t take long for one organization to break from the pack: Empower 21 announced a hybrid event from February 22 to 23.

An example of streamed on-demand and in-person-only sessions powered by the Bizzabo Agenda from the Empower Conference.

It was one of the first hybrid events ever powered by a single hybrid event platform. Previously, hybrid events relied on a patchwork of in-person and virtual solutions. But by using Bizzabo, Empower 21 allowed physical and virtual attendees to register in the exact same way and attend 49 sessions ranging from luncheons and panels to keynotes and workshops. Even better, the enhanced integration allowed in-person attendees to network with their virtual counterparts.

Empower 21 wasn’t a simple in-person event live streamed to an online audience like Apple’s September Event. It created one unified audience across in-person and virtual. Attendees could communicate, interact, and share the same experience. It’s just one example of how hybrid events are reconceptualizing what events can be.

Coming out of spring 2020, everyone knew in-person was going to be a longshot. One conference after another switched over to virtual, postponing all physical events until at least 2021.

But Meeting Professionals International (MPI) isn’t any old organization. It’s the largest meeting and event industry association in the world. If there was any one organization voted most likely to bring back in-person events safely, it was always going to be them.

They announced a hybrid version of WEC Grapevine, which they described as “two events, planned and executed simultaneously with one remarkable takeaway—to move our profession into recovery.”

Practically, that meant a five-day in-person conference in Texas with a digital experience layered on top. They ran 23 concurrent sessions and five general assembly sessions for 1,739 attendees. Of the total, 608 people visited in-person. The results were phenomenal, with a 93% attendee satisfaction rate.

Twitch is the live streaming service for the world gaming and esports, and more. When they announced their in-person conference TwitchCon, everyone knew they’d launch a fantastic virtual component—and they did.

TwitchCon San Diego gave us all the feels. pic.twitter.com/XDobOT34Uo

TwitchCon combined lives treamed keynotes and panels with more heavily produced segments like a Blink-182 performance in 2019 and dozens of gaming tournaments throughout the event. Although they dialed back the in-person element for 2020, they’re gearing up to get back to hybrid in 2021.

Some events work more or less the same online as in-person. For example, an attendee can soak up the same information from a sales strategy conference whether they’re sitting at home or in a theater.

But what about wine tasting?

That’s a question Austrian Wine has been struggling with since the pandemic first struck. In November 2020 they came out swinging, running their first hybrid event: a live wine tasting in Moscow.

They hosted 160 trade visitors to taste 195 Austrian wines, providing virtual access to winemakers via pre-recorded introductory videos and live video chat. The attendee response was exceptionally strong for a world first event—78% said they were “very satisfied” with their experience.

In April 2020, the German government banned all major events until the fall. For Europe’s leading video game trade show, Gamescom, that posed a problem as it was slated for August 22 through 29. Like a lot of traditionally in-person events, they slimmed down their offering and pivoted to virtual events, welcoming more than 50 million unique users from 180 countries.

But they aren’t staying virtual-only.

Gamescom recently announced it’s getting back to its roots, announcing a hybrid event “with on-site and digital elements planned.”

As an event that built its reputation on in-person events, it’s tremendously exciting to see them returning to in-person along with the best of virtual.

Junction started out as a single hackathon in Helsinki, Finland. Finns would descend on the capital to experiment with tech and show off their latest inventions. Over the years, Junction spawned regional hubs all around the world and its flagship event ballooned in popularity.

In 2019, 1,500 developers and designers from all around the world converged for a three-day hackathon. Junction 2020 was supposed to be even bigger—but the COVID-19 pandemic put a stop to that. A worldwide community of hackers wouldn’t be kept down for long, though. Junction’s team immediately began planning a hybrid event that could unite a worldwide network of hackathons to simulate the in-person experience.

They empowered 30 local hubs to host their own hackathons, which competed across 14 global challenges. Even though attendees were hundreds or thousands of miles apart, they still enjoyed the familiar sense of community and belonging.

The pandemic poured gas on the fires of innovation and transformation. Doctors are now diagnosing patients via video call. Students are learning online. Diehard office advocates are finding solace and productivity in remote work.

Even though Apple proved out the formula years ago, we’re only starting to see the potential of hybrid events today. Moving forward, we can expect to see hybrid events that create unique experiences for virtual and in-person attendees in a way that is greater than just simply live streaming a live event.

Expert predictions on hybrid suggest that as more companies pivot to hybrid, innovation and invention will only increase. Whatever comes, we believe the next generation of events will be more than either of the two options that came before it.

It’ll be some different—something better.

See how one of the leading software analysts in the world is evaluating the technology that will power the hybrid future. 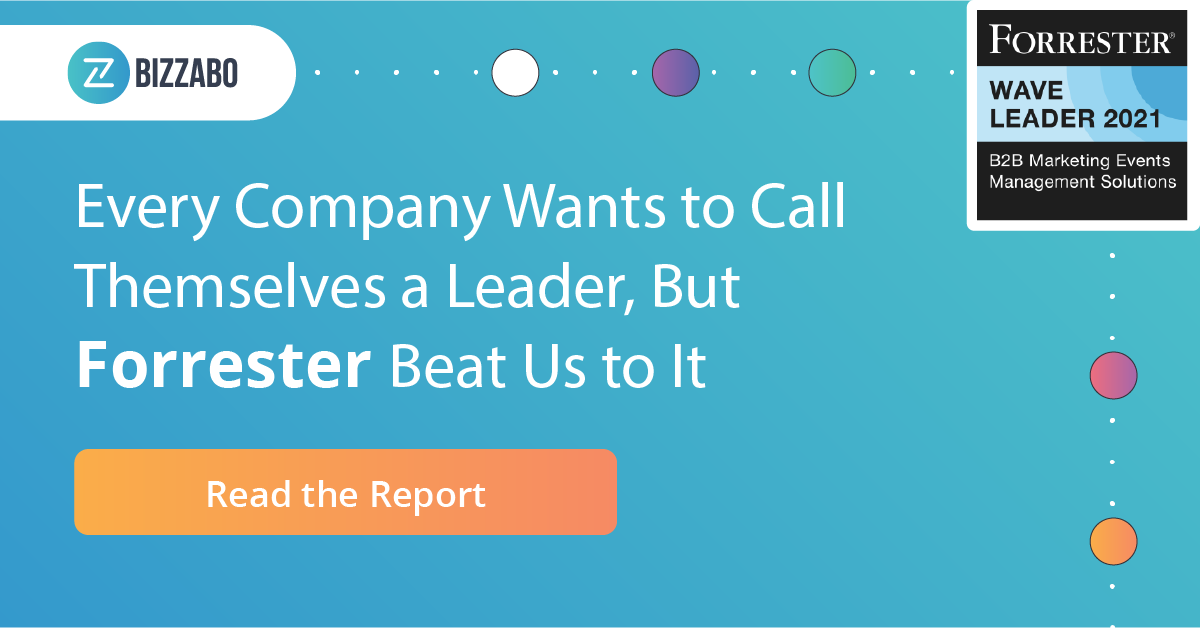 From aerial performance spaces to the world-famous AT&T Stadium, there are plenty of Dallas event venues to choose...

19 Salt Lake City Event Venues That Your Attendees Will Love

The 8 Most Popular Use Cases for Webinars

More and more event professionals and marketing teams are turning to webinars to engage prospects, customers, and even employees in...