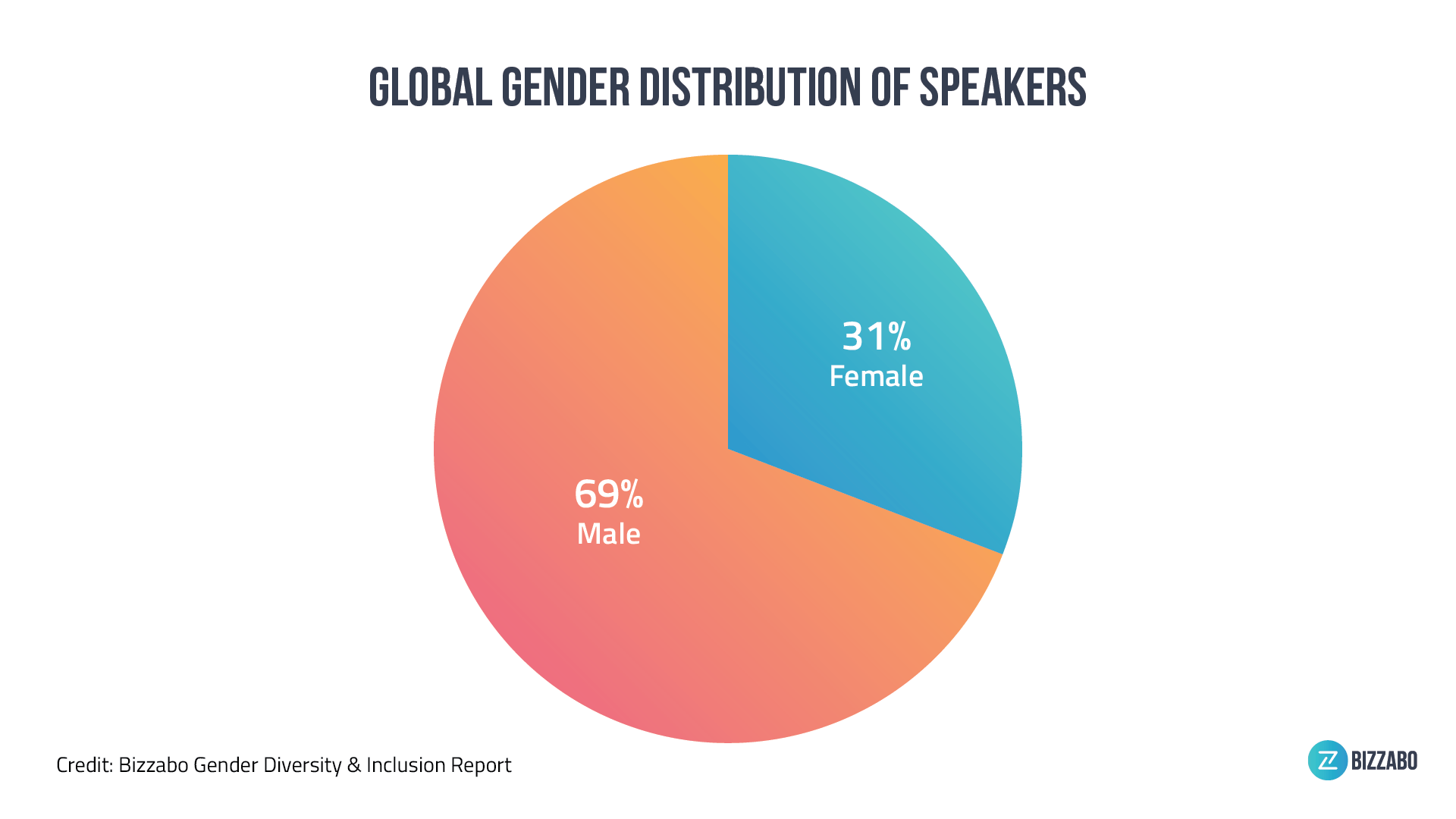 We analyzed event data from thousands of events over the past five years and discovered that events still have a long way to go when it comes to gender diversity.

We recently released the results of our first ever “Gender Diversity & Inclusion in Events Report.” The report analyzed the gender diversity of more than 60,000 event speakers over a five-year period, from 2013 to 2018. The study spanned 23 countries and thousands of the world’s largest professional events.

“Every event benefits from having greater gender diversity and balance across its speaker lineup,” said Alon Alroy, Co-Founder & Chief Marketing Officer at Bizzabo. “By releasing this data, we hope to spotlight the lack of representation that’s still, unfortunately, too common.”

Almost 70% of All Event Speakers are Male.

Globally, according to our analysis, more than two-thirds (69 percent) of all speakers were male, while less than one-third (31 percent) were female. Of the 20 other countries studied, Poland came in last, with only 10 percent of its speakers being female. Belgium (13 percent) and Portugal (14 percent) rounded out the bottom-three. The country with the highest number of female speakers was Kenya, at 42 percent versus 58 percent. Right behind Kenya were Mexico (39 percent) and the United States (35 percent). Over the last three years, gender diversity has improved — albeit narrowly. In 2016, 70 percent of all speakers were male versus 30 percent female. In 2017, female representation went up to 33 percent, only to decline to 32 percent this year. The table below shows the evolution: For the “Diversity & Inclusion in Events Report,” we used a high-precision facial recognition technology to categorize gender profiles, while keeping the identities of speakers anonymous. The new tool harnesses the power of Artificial Intelligence to accurately profile images of event speakers and identify gender. With over 60,000 images examined, the company was able to establish that its AI tool is precise nearly 100 (99.27) percent of the time.

“Every day we’re building new tools that enable brands and businesses to maximize the power of events,” said Boaz Katz, Co-Founder & Chief Data Officer at Bizzabo. “In addition to recognizing gender with face recognition, AI technology has many different applications in the events space and we’re very excited by what the future holds for the industry. There is an endless amount of data that can be leveraged to help organizations understand the impact created by bringing people together.

Infographic: The State of In-person Events

After a successful — albeit begrudging — era in which virtual events reigned supreme, event professionals are increasingly planning and executing in-person...